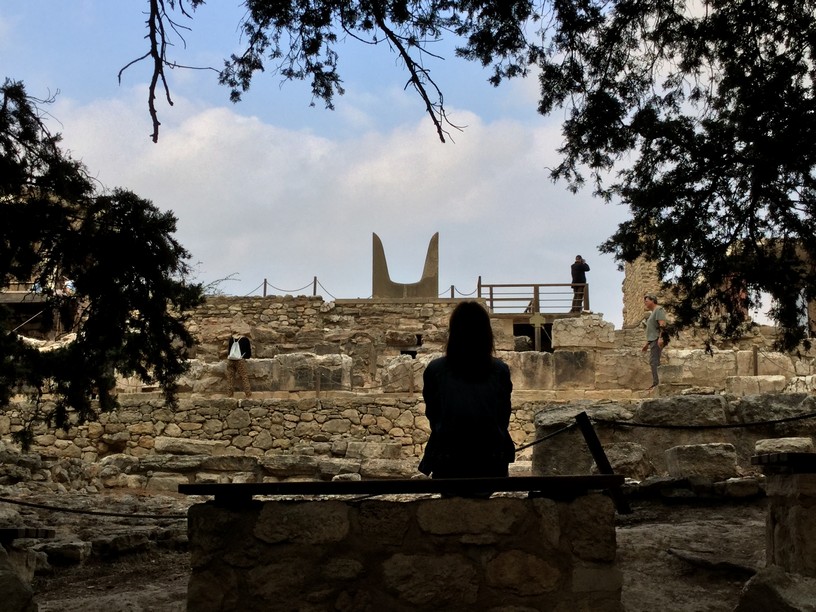 When I was young I learned about some of the ancient myths from books, at school or on TV. The legend of the Minotaur on Crete was one that stood out for me even though I knew nothing of the civilization that created it. Although I picked up the original story from the Greek myths, I have to admit a scene in the classic Terry Gilliam film Time Bandits stuck with me as much as the original stories. I always wondered where the Minotaur lived, and also wondered whether the labyrinth was as tricky to escape from as the stories said.

Located south of the modern city of Heraklion, the Palace of Knossos stands as the reminder of the ancient Minoans, a civilization that existed from 3000-1450 BC.

During our stay in Crete last year we visited the palace as well as the museum in Heraklion where many of the pieces found at Knossos are on display. We first drove to the Heraklion Archaeological Museum, located a bit south of the harbour. We purchased a combination ticket online that gave us entry to both the museum and the palace site.

The museum held a large number objects that ranged from jewelry to pottery to giant axes. We spent a couple of hours there and probably could have spent a little more if we hadn’t moved quickly through a few spots where the tour groups were heavy.

After spending time at the museum we drove out to the palace. There’s free parking a short distance from the complex, although there are also pay lots even closer. There were a number of touristy places within walking distance, from shops selling trinkets to basic restaurants.

The grounds of the palace covered about 150,000 square feet (14,000 square metres), larger than two football fields. The area had been inhabited for a few thousand years before the first palace was finished around 1900 BC on top of previous settlements. It was destroyed about 200 years later (either by an earthquake or invaders) before being rebuilt even grander than before. Eventually it too disappeared along with the Minoan civilization and little remains today. Some speculate it was wiped out by the massive tsunami caused by the eruption in Santorini, while others believe invading Greeks destroyed it following an invasion. Whatever the reason, the Minoans left behind only scattered remnants of their once-thriving civilization.

The site had excellent signage in Greek and English that explained most of the reconstructed buildings as well as some of the original ruins. We were fortunate so only have a few tour groups around when we were there, so it was not quiet but not too crowded either.

One thing I learned about the site at Knossos was that there has been a lively debate about the restoration work done there. Much of it was done by Sir Arthur Evans in the early 20th century. His vision was inspired by Minoan culture rather than being faithful to the original design.

By not leaving the original remains intact, Evans was practising restoration rather than conservation with some complaining that it damaged the original design. The reconstructed buildings mostly represent the latest era of the Minoans as well as the Mycenaean era. While this is noted at the site, many might not know this. On the other hand, it has been argued that the restoration work may have saved the site from being completely lost. Regardless of the controversy, we found the site to be impressive and the restoration work gave a sense of the grand palace from long ago.

It was interesting to seem them combined, with some areas left largely intact while others had buildings constructed over them. We have visited places that have been left alone to conservation, and while I appreciate viewing authentic remains, there often isn’t much to look at besides cut stones and outlines of structures in the ground.

The complex was very walkable, with a lot of flat surfaces and generally wide steps. Much work has gone into reconstructing overtop much of the original plan. The differences between the parts that had been redone and the original ruins were clear, with the reconstructed ones giving the palace a greater sense of size and height.

The rebuilt throne room was one of the more interesting rooms at Knossos. I half-expected the Minotaur to break down the barred door and storm in!

The piece below is called the Horns of Consecration, a religious or ceremonial symbol found extensively at Minoan sites. It was likely based on the horns of bulls, as bulls were used elsewhere in Minoan art. Sir Arthur Evans coined the term while working at Knossos and it stuck. The Horns of Consecration are usually represented as a stone slab, with the upper part fashioned into two points.

We did Knossos at the end of our stay in Crete. After enjoying beaches, caves and mountains, a bit of ancient history was a fitting end to the trip. Although we never found the labyrinth, at least we didn’t find the Minotaur either!