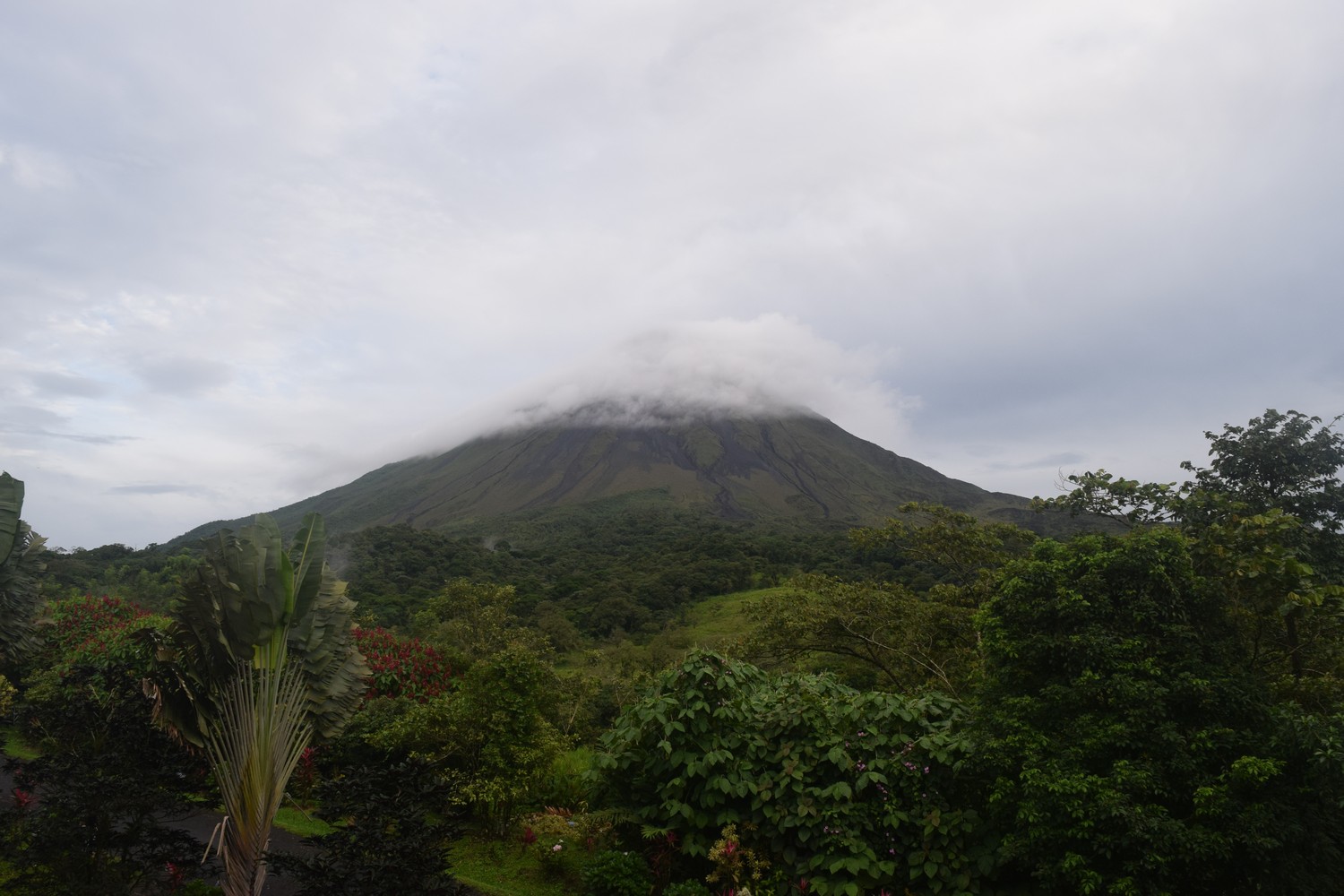 Our stay in the Nicoya Peninsula a few summers ago included a day trip to Arenal. We considered renting a car but ultimately went with a day tour. Our trip included a boat trip across Lake Arenal, a jungle tour near the volcano and a visit to one of the nearby hot springs. If we did it again I would go with a rental and an overnight stay around the volcano as it gives more flexibility to various options around the volcano. On the other hand, it rained heavily around the volcano over the previous few days and continued while we were there. The conditions on the route included rockslides, washed out roads and detours so in one sense we were glad someone else was driving and navigating.

We stopped at a local cafe for lunch. The back area had a nice view of Lake Arenal.

From there we took a boat across the lake. At this point the grey clouds had opened up and it was a steady rain.

Although conditions were less than ideal, it was a nice trip across Lake Arenal. It is the largest lake in Costa Rica at 85-square-kilometre (33 sq mi). The scenery was dark and misty as the boat crossed the lake. Despite the weather we saw some birds on the lake.

Somewhere deep below the boat were the watery remains of the old towns of Arenal and Tronadora, abandoned when Arenal Dam was built and the lake was expanded in 1979. The new town of Arenal was built on higher ground.

After arriving on the other side we made our way to the Mistico Hanging Bridges Park, a reserve near the volcano. From there we did a guided tour, where our guide pointed our the varied flora and occasional fauna. We saw bats, snakes, tarantulas, monkeys and hummingbirds.

Unfortunately the weather limited the number of species we were able to observe during the hour we trekked through the jungle and the hanging bridges.

Considered a relatively young volcano at 7,500 years old, Arenal was dormant for hundreds of years. Then, in 1968 Arenal became active with a long period of eruptions until 2010. At the height of its activity, the volcano flung giant rocks (some up to a few tons in size) more than a kilometer (half a mile) away at a rate of 600 meters per second (2,000 ft/s). Fortunately it is quiet these days.

We went for a stay at one of the local hot springs for a few hours. It was a nice way to end things after the wet trip through the jungle.

The minibus wound its way back towards the coast, and it was late when we returned to Tamarindo. But the minibus stopped one last time along the way to give us a view of a sloth crossing a power line at a very leisurely pace.

We enjoyed what we saw around Arenal but the time was too short and there were a number of things we missed, so we’re up for a return visit in future.