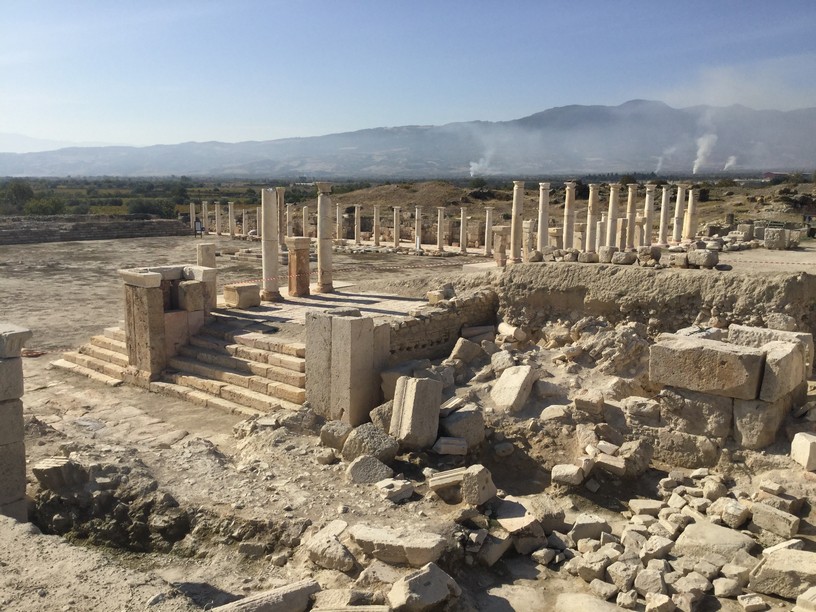 During our trip to Turkey in the fall of 2019 we rented a car from Izmir and drove around 3 hours to Pammukale where we stayed overnight. On the way back to Izmir we stopped at Tripolis on the Meander, a series of ruins located about 20km northwest of nearby Hierapolis. Although Pammukale and Hierapolis were popular, Tripolis was empty when we visited and we had the site mostly to ourselves.

On the way to Tripolis from Pammukale we took the scenic route by leaving the main highway and going through a number of small farming villages. The route put us on a winding dirt road that was too narrow for oncoming traffic at times. While we didn’t expect the detour to be so rough, it gave us a chance to see villages and rural life we wouldn’t have viewed from the busy highway.

As we drove along the mostly dirt road it was a slow drive but eventually we found Tripolis. The site was easy to spot even though it had a simple sign at the entry. There also wasn’t much of a parking area so we just parked along the side of the road near the entrance.

There was no ticket booth or charge for entry. We didn’t even see a security guard until we had almost finished our visit, when he came out of a trailer located on the site and starting doing his rounds.

Originally part of ancient Phrygia, the city was originally founded on the northern bank of the Meander River. The term “meander,” meaning a winding path or pattern, was named after this river. Built during the Roman period, the main thoroughfares of the city were built on a plan of intersecting streets. This colonnaded street ran from the east to the west with a length of 450 meters.

Named Hierapolis street, this was the other main street that ran from the north to the south and connected to the colonnaded street. It opened up to the large open agora (public space)

Most of the structures visible in Tripolis are dated from the Roman and Byzantine periods.

On a plain overlooking the main part of the town there were large numbers of ancient artifacts arranged on the ground, part of the archaeological research, cataloging and restoration work that has not yet been completed. There appears to be a lot or work still to do with restoring the site, and given a more time I imagine it will look even better one day.

One thought on “Visiting Tripolis on the Meander in western Turkey”