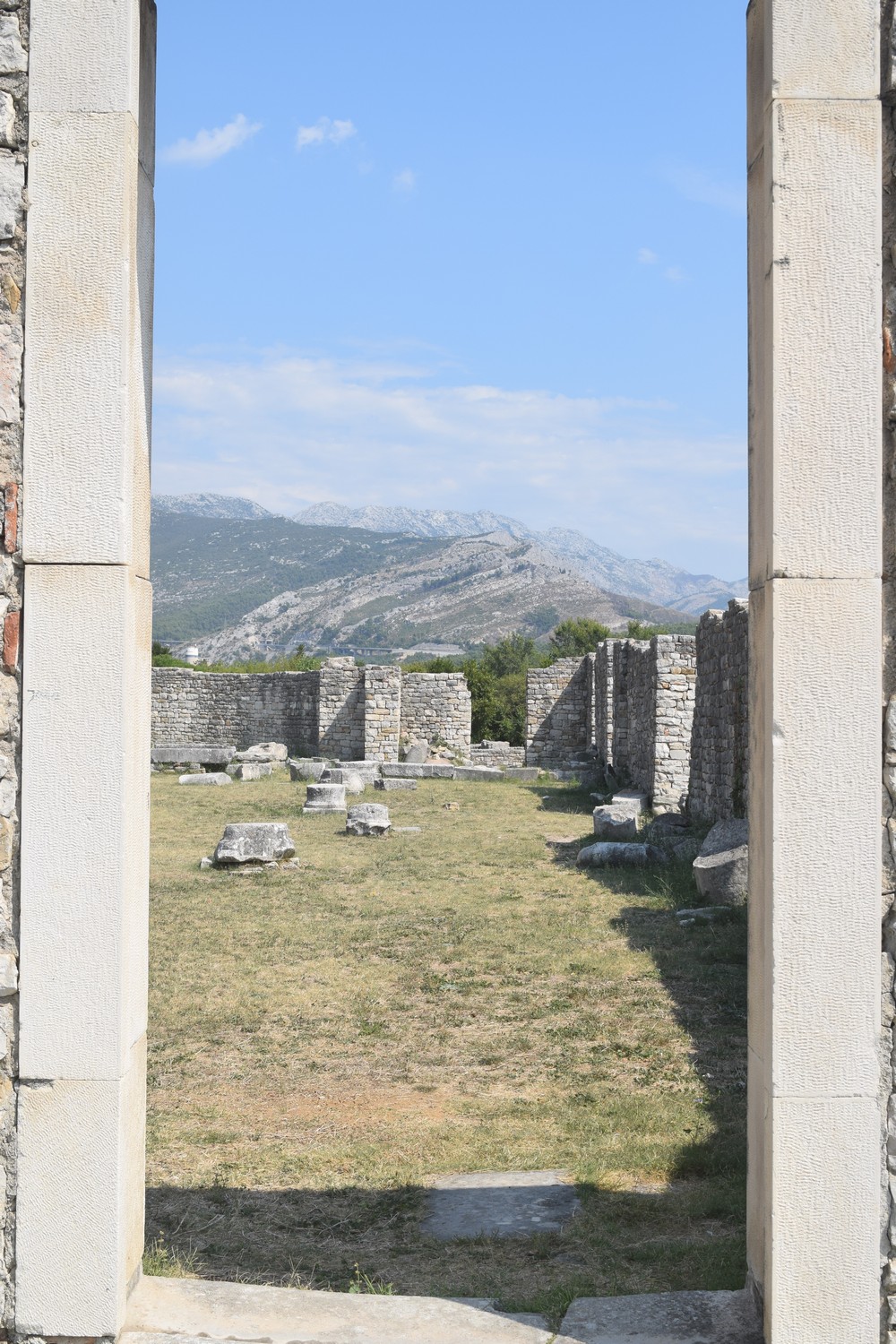 In the previous post we did a day trip to Trogir. Our trip to Salona took a very similar path, although we went on a different day. To get there we took the bus from Split to the nearby town of Solin. Both the #1 and #37 bus make their way to Salona from Split. We took the #1 from the National Theatre in Split which gets you to the main entrance in Salona. It is also possible to take the #37 and do both Salona and Trogir in a day, but you have to leave early. In our case we did both separately so we weren’t pressed for time.

Dating from the 7th century BC, Salona is the largest archaeological site in Croatia and covers a wide area. It was home to up to 60,000 inhabitants during the Roman era and was reputed to be the birthplace of the emperor Diocletian.

There was a great variety of tombs here. This area mainly focused on the later Christian era, with a number of the tombs having religious inscriptions on them. A basilica along with other religious buildings were constructed here in the 4th and 5th centuries.

Within the ruins of the basilica and along the walls are a number of pieces gathered on display. They include tombs, the remains of arches and other pieces. They are densely packed together but the sheer number of them was impressive.

We briefly entered the museum. It was small and just had a few pieces inside but it told the story of the excavation work done there, mainly due to the work of Frane Bulić. He was a priest, archaeologist and historian whose work led to a number of discoveries of early Christian and Croatian history in Dalmatia.

After passing down the hill from the museum we took a long, tree-lined path that eventually opened up to a wide view of the main part of Salona.

One of the best things about our visit was the quiet. It was similar to some of the lesser known archaeological sites in Turkey, where you would rarely see anyone. But in this case, it was the biggest site we’d been to that was essentially devoid of people. Diocletian’s Palace in nearby Split might be beautiful and unique, but it was always crowded when we walked through it. Salona, on the other hand, was refreshingly free of tourists. I imagine most people were enjoying the beaches during the hot and humid days of summer rather than trekking out to open-air archaeological sites.

Salona (Solin) was the capital of the Roman Province of Dalmatia and played a role in the early and late history of the empire. The colony was founded by Julius Caesar sometime in the 40s BC. It bore the name Colonia Martia Ivilia Salona.

By 640 AD, the city was almost abandoned as successive invasions caused the citizens to flee to the sturdy walls of nearby Diocletian’s Palace. The city was supplanted by other nearby settlements until the fall of the Roman Empire.

In the eastern suburb of Salona five arches spanned the western-most backwater of the Jadro river (a river that still goes through Solin and flows into the Adriatic). They can still be seen below.

The construction of the city walls took several centuries, and helped keep out Germanic tribes from invading. There used to be at least 90 towers fortifying the walls, and the total circumference of the walls was about 4 km (2.5 miles).

One of the best preserved parts of the earliest section of the city is the eastern wall and Porta Caesarea (gate). It had two octagonal towers and three passages, one for cart traffic and two for pedestrians on each side of the wider passage. After the town expanded to the east and west, the gate lost its primary purpose and was used for carrying construction materials to the nearby aqueduct.

This outpost was populated largely by traders and military veterans. The fact that Salona had both a theatre and amplitheatre meant it was a significant urban centre in the empire.

The amplitheatre at Salona is one of the most recognizable buildings of Roman architecture. The remains of Roman amphitheatre indicate that gladiator fights were held in the city of Salona just as in any part of Roman empire, until the fifth century when they were finally banned. It is estimated that it held between 15,000-18,000 spectators, a decent size for the time.

We made the mistake of going on a bright sunny day in the middle of summer as there was little shade at the site and we each had just a bottle of water during our three hour stay. By the time we made our way to the #37 bus stop at the Southern end of the ruins near the amplitheatre, were were feeling the first stages of heatstroke, so if you travel there during hot and humid weather we advise you take hats or umbrellas and lots of water.

But aside from the heat. it was a great having such a large ruin essentially to ourselves. Is Salona Croatia’s biggest best kept secret? We thought so!